DONNY EDWARDS “An Authentic Heart & Soul Tribute to THE KING” Donny Edwards’ admiration and appreciation of Elvis Presley began at an early age. His mama recalls how he tried to dance to Elvis’ records even before he could walk. By the age of five, Donny was so passionate about Elvis that he pushed his grandmother’s hand away from the radio dial as she attempted to change the station while “Hound Dog” was playing. Little did he know that his devotion would lead him to a beloved career, paying tribute to one of the greatest musical artists in history. Donny Edwards is an international, multi-award winning professional Elvis tribute artist. Today, he is one of the most sought after performers in the business, bringing his show to stages in casinos, theaters/venues, fairs/festivals, corporate/special events, cruises and production shows, world-wide. He is a versatile performer with the ability to re-enact each era of Elvis’ life and career. His dynamic performance will take you back to the 1950’s and the early years of rock n’ roll, getting you “all shook up”, all over again. Then you’ll go on a ride through the 1960’s, from Elvis’ biggest hit movies to the famous black leather “68 Comeback Special”. Finally you’ll revisit the legendary Las Vegas years of the 1970’s as Donny recreates the performances that made Elvis the one and only “King of Rock n’ Roll”. Throughout his career, Donny has had the opportunity to work beside many of the original musicians that performed with Elvis Presley himself. He’s worked with the Jordanaires, The Sweet Inspirations, DJ Fontana, Charlie Hodge and Bob Moore, to name several. Donny has also had the pleasure of working with Elvis’ inner circle such as Sonny West, Al Dvorin, Charles Stone and Ed Bonja. Elvis Presley Enterprises and CKX have hired Donny for tribute shows, TV spots and corporate events, many times over the years. Donny has also performed private parties for and worked with celebrities such as Dale Earnhardt Jr. and the NASCAR family, Marie Osmond, Bill Medley of the Righteous Bros. and Elvis’ friends and co-stars, Jimmy Velvet (Elvis’ friend and recording artist), Darlene Thompkins (Elvis’ co-star in “Blue Hawaii”) and Cynthia Pepper (Elvis’ co-star in “Kissin’ Cousins). Not only is Donny known for his riveting live performances, but he has also appeared in numerous TV shows and ads, including ABC’s “Monday Night Football”, MTV’s “Viva La Bam”, CBS’s “The Young and The Restless”, ABC’s, “The Next Best Thing” and many Elvis character TV ads in the UK, Europe and Australia including “Kingsmill Bread” and “Toshiba”. He regularly sells out shows, performing with an 8-9 piece band, all across the US and in countries such as Canada, Japan and Australia and to audiences as large as 25,000. Among his professional accomplishments, Donny was the star performer at Las Vegas’ famous “Elvis-ARama” museum and showroom for 3 years before it closed its doors in 2006. He has appeared on the cover of two published books about Elvis tribute artists and is also a 2 time world champion of two of the biggest Elvis contests ever, at Isle of Capri and Potawatomi in 2006 and 2007. Donny also finished in the top 3 in the “Ultimate Elvis” contest held in Memphis, Tennessee for 3 years in a row in 2007, 2008 and 2009 (he no longer does contests as we feel his career has moved beyond the amateur competitions at this point and his professional tribute show is what is important to him and what he focuses on now). Recently, Donny was asked to appear on the David Letterman show, but due to other commitments during the time, he was unable to accept. This past August, during Elvis Week 2013, in Memphis, Tennessee, Donny was given the honor of being the one and only Elvis tribute artist to have been granted permission by Elvis Presley Enterprises, since 1977, to perform his show on the estate grounds of Graceland while at the same time, being commissioned an Honorary Tennessean by the Governor of Tennessee. He is also proudly on Elvis Presley Enterprises, “preferred” tribute artist list and is held in their highest esteem. Donny just recently became an official Las Vegas casino headliner act as well, selling out all 3 of his debut shows ~ a major accomplishment! Donny Edwards maintains a performance of remarkable authenticity. His humility, charm and southern manner, coupled with his uncanny sound and appearance, will make you feel as if you are watching “The King himself 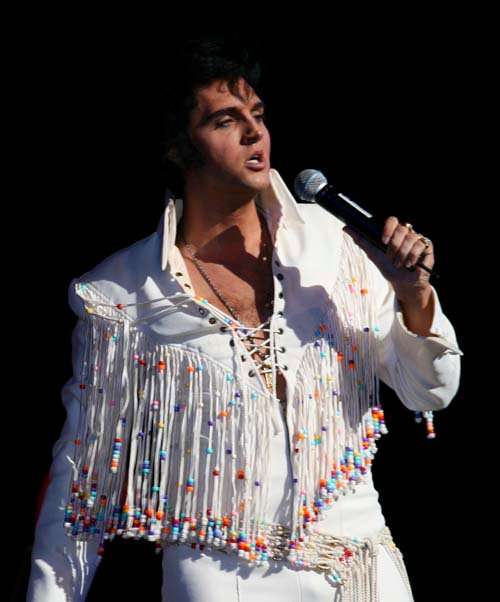